On Earth, people refer to her as The Ice Queen. She is the world’s best-paid fashion model, her face on every magazine cover, and everybody knows her name. Behind the curtain of fame, her life is lonely, secluded, and full of shadows of her past.

Order on Amazon
Order on WH Smiths
Order on Waterstones 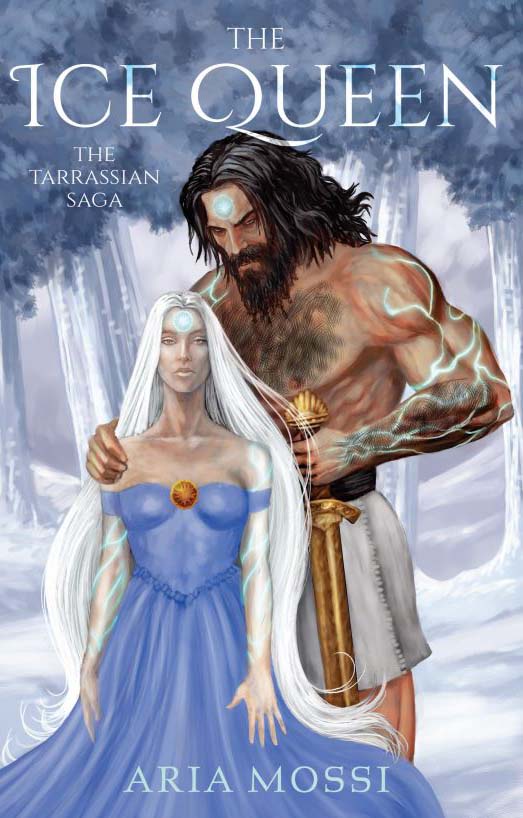 ,The Ice Queen is book one in the new epic fantasy, The Tarrassian Saga. It follows the journey of Sia Bentley, a famous British supermodel, as her life changed in the blink of an eye.

To the world, Sia is the exceptionally beautiful young woman; the best paid high fashion model; the prodigy who is fluent in seven languages and has a PhD in Classics. She is the cold, fiercely private celebrity; the English rose with a posh accent and an impressive bank account. She is The Ice Queen.

In reality, Sia is the lonely shadow of a woman who lives behind carefully built ice walls. Her glacial persona is not a publicity stunt nor a consequence of her unusual beauty. It is simply a mask, a desperate attempt at self-preservation.

The day she is taken from Earth by alien slavers, her life is meant to change beyond her control. Sia soon finds out her tall walls of ice, exquisite intelligence, and non-existent emotions are weapons feared by aliens, monsters, and humans alike. She can once again survive behind her terrifying walls of loneliness.

Until he takes them down…

The King of Tarrassia is the ruler of the most advanced, respected and feared species in the Universe. He is also the Commander of the strongest Galactic Coalition, the last defence against the slavers and the Coalition of the Dark Moon. The King is everything Sia is not. Reckless. Arrogant. Unhinged. Unlike Sia, he thrives on being out of control. His people call him the Mad King behind closed doors.

Despite their knowledge, political power and physical superiority, the Tarrassians are an elitist, snobbish society with a hero syndrome, outdated rules and narrow minds. They had long lost their beloved mating marks, referred to as THE SIGN. Years of inbreeding amongst clans have led to a lack of fertility. When the Healing Elder discovers the Humans are the only compatible species, the Tarrassians rescue five enslaved humans. The King is bound to rule by example and choose one of them as his human queen.

This event is the beginning of an epic love story meant to change the history of the galaxies and the course of humanity. So, it begins the clash between species fire and ice personalities.

Stranded on a hostile planet, they kindle an unexpected love story that will eventually shape the beginning of a new world—a world where the strong learn the power of the weak.

The once arrogant and elitist King learns to step back and become the protective shadow, the shoulder Sia can lean on while she takes the limelight. With his support, respect and love, Sia finds her inner hero. A hero who uses knowledge, hope, and kindness to free a planet, restore the Universe’s balance, and break the chains of angels and enslaved people alike. She becomes what she was always meant to be: The Queen of Tarrassia.

In return, the once glacial and emotionless Ice Queen turns into a fiery, passionate woman, fighting tooth and nail for her man. The King finds his inner hero with her support, respect, and love. He becomes what he was always meant to be: The Brave King.

PRAISE FOR THE ICE QUEEN

I read this as an ebook. It’s not yet available in the paperback format. I loved the female character! A strange mixture of strong and fragile. The love story is out of this world and not just because it happens in a different galaxy. It’s all fast-paced and so unpredictable at times. No spoilers, but the end was like, WOW! Looking forward to the paperback. The cover looks just as hot as the love story. Can hardly wait for the second book in the series. The story itself doesn’t end in a cliffhanger, but there is a link to the next characters in the epilogue.

I was not sure what to expect when I requested this book, mostly I picked it because of the cover, but it’s safe to say that it surpassed my expectations. I loved the writing. It just flowed so nicely and naturally. I read this in only a day, and I never tired of the author’s writing style. This book has aliens and it play with the fated mates trope, and from that you can draw quite a few conclusions, and yet it was still unique. Not only did it have the Tarrassian lore to keep you interested, it also introduced other alien species. I’m actually really curious about the Sphinx and would love to know more about them. This book ends in a way that really makes you want to read more and if I had to guess I’d say the next books will be about Natalia. At least I hope it is as I would love to read her story next. Overall, a really enjoyable read. I recommend it for people who liked the Ice Planet Barbarians by Ruby Dixon.

The Ice Queen is the first book in The Tarrassian Saga. It features the inspiring story of one of the five Humans taken from Earth by alien slavers. The five books in the series are individual stories and only connected to the next one by the epilogue. The stories are best enjoyed when read in order.